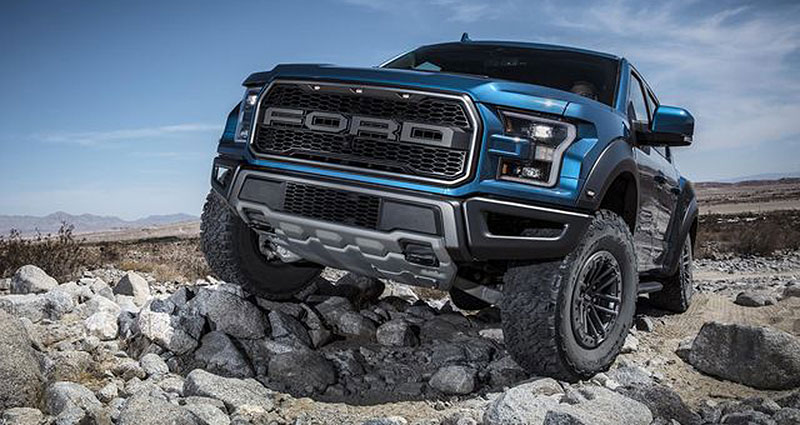 The mighty new Ford F150 Raptor is equipped with the superb 3.5 Litre Ecoboost Twin-Turbo V6 offering a whopping 450bhp and thumping 510 ft-lbs torque all delivery via 10-Speed Automatic Transmission. It is available in both full four door Crew Cab and smaller, extended Super Cab models and with a remarkable range of standard and optional features.

Launched in 2010 the Ford Raptor is the badge given to the Ford Motor Company’s highest performance pickup trucks the F-150 and the Ford Ranger. The Raptor is designed to be the street-legal version of an off-road racing vehicle.

Naturally optimised for off-road use the Raptor comes with AWD as standard, a mid-travel suspension system and all-terrain tyres. The raptor packs the most powerful engines in the F-150 / Ranger models.

The first production Raptor, molten orange with the digital mud graphic, sold at auction for $130,000 with all proceeds above the MSRP going to charity. Fitted with a 6.2 L V8 engine rated at 500 hp, the race version, the F-150 SVT Raptor R, was built for the Baja 1000 races.

The First Generation Raptors were built in Ford’s Dearborn Truck Plant in Michigan between 2010 and 2014. They were available in 2+2 extended cab and 4-door crew cab and were powered by other a 5.4L modular 3-valve V8 or the larger 6.2L Boss V8 with 6-speed 6R80 automatic transmission. The second generation, launched in 2017 maintained the first generation body configurations but changed the powertrain to a 3.5L D35 twin-turbo V6 petrol engine and upped the gear box to a 10-speed 10R80 automatic.

The current Raptor (2019) model, saw the introduction of the Ford Ranger Raptor. Placed above the Wildtrak appearance package, the Raptor is fitted with suspension and chassis upgrades to improve its off-road capability. It also has a widened track and a raised ride height.