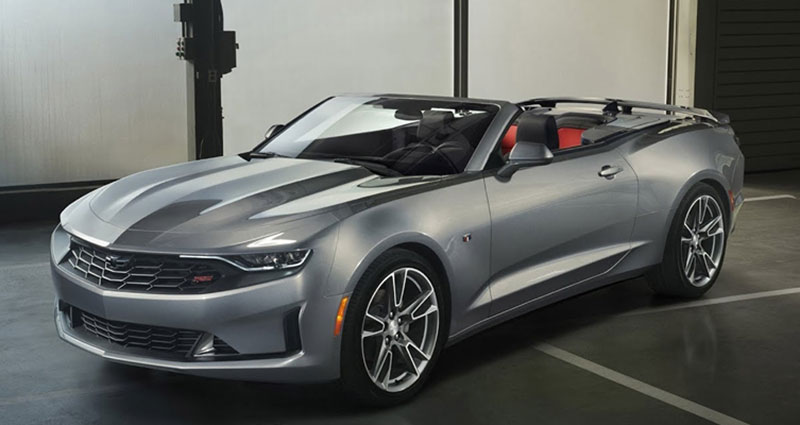 The new Chevrolet Camaro is offered as both Coupe and Convertible, in the desirable ‘SS’ model complete with 6.2 Litre 460bhp V8 engine and mated with either 10-Speed Automatic transmission  w/Paddle Shift or 6-Speed Manual.

For ultimate track performance, the 1LE ride and handling package upgrade can be added to either.

For the most vicious power, the range topping Camaro ZR-1 delivers a breath-taking 650bhp, launching from 0-60mph is as little as 3.5 seconds. However, it is not all brute force as the remarkable lap time set by the ZR-1 Nürburgring will testify – click link for details: www.nurburgringlaptimes.com/Chevy-Camaro-ZL1/

The range is offered with a remarkable choice of standard and optional features, so to enjoy it’s remarkable blend muscle and modernity, please call 020 7384 3044 to discuss your requirement further.

The Chevrolet Camaro first rolled off GM production lines in 1966 in a response to the release of Ford’s Mustang two years earlier. Covering all its models it has been classified as a Pony Car, a Muscle Car and a Grand Tourer. In all over 5 million have been sold and it remains one of the great icons in the US vehicle pantheon.

The Camaro went through four generational changes before production ceased in 2002. The nameplate was revived on a concept car in 2009 and it was from this that the fifth generation emerged.

The current (sixth) generation was launched in May 2015 to coincide with the vehicle’s upcoming 50th birthday. The 2016 model weighed 91kg less than its predecessor and nearly three quarters of the sixth generation’s architectural components are unique, not being shared with any other current GM product. It was named Motortrend’s Car of The Year in 2016.